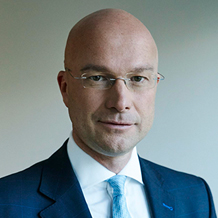 Thomas Limberger, born in 1967, has a distinguished career in corporate management, restructuring and wealth management. He earned his Master’s degree in business administration after studying at the French Grand Ecole Institute Superieur de Gestion and the Harvard Business School.

After working at Fresenius Medical Care AG, Limberger moved on to the Management Board (CEO) of General Electric Central Europe, with responsibilities for 11,000 employees and sales in excess of in central Europe. Under his stewardship, revenues doubled to $6.5 billion.

During this period, he earned the moniker: “The Jack Welch of Germany.” From GE, Mr. Limberger moved to become CEO of OC Oerlikon AG, and proceeded to restructure the industrial conglomerat with a revenue base of over $5 billion and 22.000 employees. From 2007 to 2011, he was CEO of Von Roll, a global leader of produces insulation products and systems for electrical machinery. Next to his operational career Mr. Limberger has held various non executive Board of Directors positions in multinational companies (SGS, Moevenpick, Deutsche Venture Capital, , etc.)

In 2011, he founded the Silver Arrow Capital Group focusing on industrial growth sectors, real estate and infrastructure projects. Since 2014, the Silver Arrow Capital Global Equities Fund has returned 66% (2017) on investments. In addition Mr. Limberger is the majority shareholder of PrivatAir, a Swiss based airline flying for major airlines like Lufthansa, KLM and SAS.

“I am honored to be joining the Board of the Institute, which has been a cutting edge leader in the development of stem cell therapies and other strategies to promote healing in patients with serious illnesses,” – Thomas Limberger.