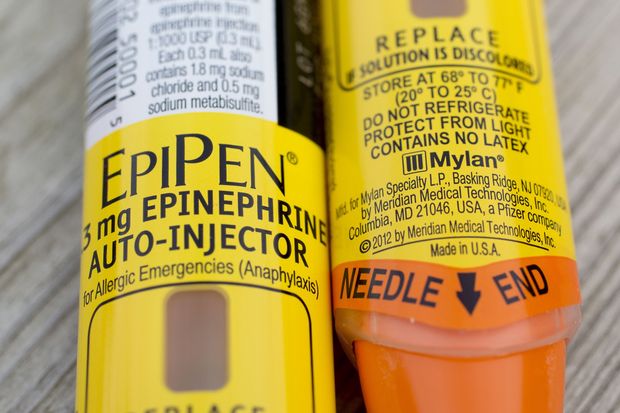 The product, whose brand-name version is manufactured by Mylan NV, touched off a furor two years ago over its price increases of 548% over about a decade.

The device injects epinephrine into adults and children experiencing anaphylactic and other shock from causes such as bee stings and reactions to food and medicine. Mylan introduced its own half-priced generic version of the drug in 2016.Teva, based in Israel, is now authorized to begin marketing its generic auto-injector with epinephrine in two strengths. “We’re applying our full resources to this important launch in the coming months and eager to begin supplying the market,” a spokeswoman for Teva said, declining to disclose the planned price of the product.

The approval of a generic version of this product marks something of a milestone for FDA Commissioner Scott Gottlieb. Dr. Gottlieb has made approval of generics a high priority for the agency, including products commonly referred to as complex generics.

These are drugs that have long been available under pricey brand names but were difficult to approve as generics because of complex means of administration, like nose sprays or injections. The EpiPen is one of the first such approvals.

“We’re especially committed to the development of generic copies of complex products,” Dr. Gottlieb said Thursday. “These products can be hard to copy, and therefore sometimes don’t face timely generic competition once patents and exclusivities are no longer a block to approval.”

EpiPens are crucial emergency products for people, including many children, who suffer allergic reactions. Mylan was under severe criticism from the public and Congress in 2016 after raising its list price for a pack of two auto-injectors to $609.

The drug is automatically injected into a person’s thigh to stop an allergic reaction, the symptoms of which typically include dizziness, vomiting and difficulty breathing. The medicine has a rapid onset and short duration, and works by reducing airway swelling and increasing blood flow in the veins.