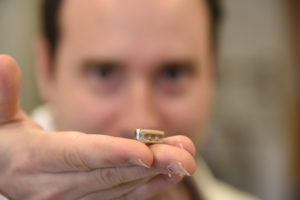 Daily pulses of electricity delivered in minute doses have banished all symptoms of Crohn’s disease for a New Jersey woman whose treatment was derived from the breakthrough theories of a Long Island doctor, the pioneer of an emerging science called bioelectronic medicine.

The experimental treatment arrives as the number of people with Crohn’s disease has dramatically risen, more than doubling nationwide in recent years. An estimated 3 million people are believed to have Crohn’s disease, an inflammatory gastrointestinal condition marked by excruciating pain, diarrhea, fever, weight loss and a wide range of disparate symptoms.

Kelly Owens, 29, of Rockaway, New Jersey, had endured more than a decade with Crohn’s, a disorder that waxes and wanes for most people. For her, it was an around-the-clock nightmare that included not only inflammatory gastrointestinal symptoms but debilitating arthritis, a known complication for some patients with Crohn’s disease. Her misery, however, didn’t end there.

Owens developed two pyodermas — deep skin ulcers — that raise the risk of infection, and she was afflicted with bone-weakening osteoporosis. That disorder likely occurred as a consequence of the powerful anti-inflammatory steroid prescribed to relieve her overarching problem with inflammation. Owens sought help from doctors all over the country, but to no avail.

She was so weak and encumbered by Crohn’s, her husband, Sean, had to carry her because she was unable to walk.

“We lived what it was like as an older couple before we were able to live as a young couple,” Owens said of the constant pain, dependence on medications and physical limitations.

Although more than 70 genes have been linked to Crohn’s disease, a precise cause remains elusive. Doctors are aware that it involves a body at war with itself — the immune system attacks the gastrointestinal tract. But what sets it off remains a mystery.