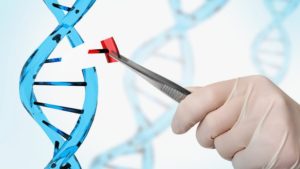 Researchers used a gene-editing tool to repair a gene mutation in dogs with Duchenne muscular dystrophy, an important step in efforts to someday use the tool to edit DNA in people with the same fatal disease.

In a study published Thursday in the journal Science, researchers at UT Southwestern Medical Center in Dallas and the Royal Veterinary College in London reported that they used the Crispr gene-editing system in four dogs to restore production of dystrophin, a protein crucial for healthy muscle function.

Duchenne is caused by gene mutations that prevent production of dystrophin. Without enough dystrophin, patients’ muscles deteriorate. Patients typically lose the ability to walk by their early teens and die by their 20s and 30s. About 20,000 children, mostly boys, are diagnosed around the world every year with Duchenne.
Scientists have tried many approaches to stop the disease. In 2016, the U.S. Food and Drug Administration approved the first drug, Sarepta Therapeutics Inc.’s Exondys 51, a weekly injection that treats a particular form of Duchenne.

More recently, small numbers of people have been dosed with experimental gene therapies that attempt to bolster dystrophin production by delivering a form of the protein to cells. There are over 45 companies pursuing strategies to treat Duchenne or its symptoms, says Pat Furlong, CEO of the nonprofit Parent Project Muscular Dystrophy, which supported some of UT Southwestern’s early Crispr work in mice.

What makes the Crispr gene-editing approach in the dog study so alluring to many in the field is the prospect of tackling the underlying genetic cause of Duchenne. “Crispr is the next step,” says Ms. Furlong, “because it can permanently change people’s DNA.”

Crispr, which stands for clustered regularly interspaced short palindromic repeats, serves as the immune system of bacteria. Scientists adapted Crispr and the Cas9 enzyme it produces to cut DNA at specific points, allowing a repair or insertion of a new genetic sequence. Its development has raised hopes for curing genetic diseases, but has also sparked concerns about unintentional cuts and deletions of DNA.

Stanley F. Nelson, father of a boy with Duchenne and professor and co-director of the Center for Duchenne Muscular Dystrophy at UCLA, said much more data is needed before moving from dogs to having a clinical trial with people.

“You can’t be certain at this point that in trying to repair billions and billions of muscle cells, you won’t induce other catastrophic problems,” he said. Dr. Nelson also consults forSolid Biosciences Inc., a company pursuing gene therapy for Duchenne. He wasn’t involved in the dog study.

In the Science study, scientists programmed the Crispr system to cut the dogs’ DNA at a precise spot on the dystrophin gene. The cells repaired the cut, enabling dystrophin production to be restored to levels that ranged from 3% to 90% of normal, depending on the muscle. Most importantly, the gene edit restored dystrophin production in both the heart and diaphragm, essential for breathing.

“It’s like putting a good spare tire on a car. It’s not as good as the original, but it gets you where you want to go,” said Eric Olson, director of UT Southwestern’s Hamon Center for Regenerative Science and Medicine and senior author of the paper.

Dr. Olson, who is also founder and chief scientific adviser of Exonics Therapeutics Inc., which licensed the technology from UT Southwestern and helped fund the dog studies, said next steps involve testing Crispr in more dogs and observing them for a year or more. If the approach works in the dogs, he said researchers hope to try Crispr in a clinical trial with people with Duchenne.